We are no longer living in the unipolar world of the immediate post-Cold War period. This is especially clear when it comes to observing the nearly 30 years war the Chinese Communist Party has waged upon U.S. economic interests—using the very free trade so worshiped by our elites as a cudgel to diminish America’s competitive advantages in peace, while propping up China’s strategic edge in the event of war.

Over time, the results have been remarkably beneficial for China and detrimental to the United States. China began by soaking up as many industrial trade secrets as it could to become the world’s leading low-cost manufacturer. The working-class jobs that created America’s middle class were systematically shipped overseas to China, leaving America’s once-vibrant middle class bereft of employment opportunities and leading to a significant decline in middle-class living standards. This, combined with a declining respect for bourgeois morality and growing government dependence, worked to increase opioid and other forms of substance abuse that exacerbated the pathologies of a burgeoning underclass of undereducated people with little hope of escaping their plight. America left these folks and their communities behind.

As China came to dominate the manufacturing market, they recognized that the key to the future was in education—notably in the science, technology, engineering, and mathematics fields (STEM). For nearly 20 years, the Chinese took their massive (and growing) wealth and invested heavily in developing educational programs for training their next generation of workers in critical hi-tech industries and supporting a civilizational ethic dedicated to sustaining it.

Thanks to these copious material, moral, and intellectual investments, China is a world leader in producing the world’s scientists, engineers, technicians, and mathematicians—the kinds of people who will dominate the newfangled knowledge economy. Meanwhile, in the United States, there was no corresponding increase in our level of competitiveness in the growing STEM fields. As David Goldman has documented at American Affairs Journal, investment in cutting edge research and development programs by the federal government has declined as China’s has intensified. 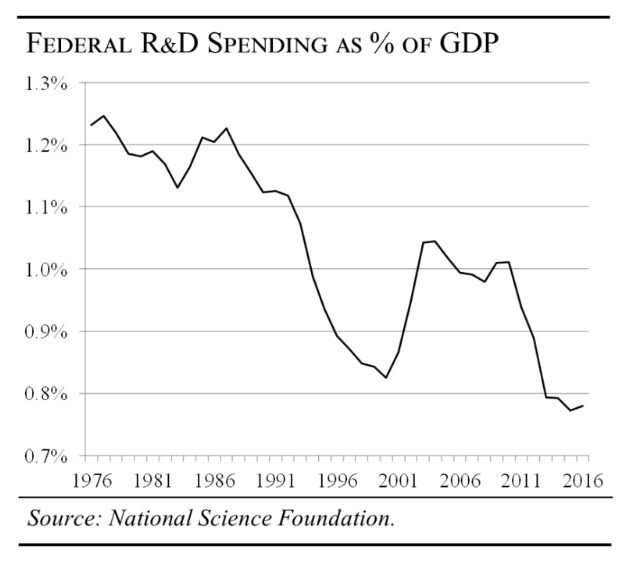 For its part, America’s education system remains mired in outmoded concepts not for a lack of funds, but for lack of proper understanding of how those funds should be spent. The Department of Education consumes $68 billion a year. Yet, America’s students are assessed merely as “average” when compared to other students from OECD countries. In standardized tests, the ranking of U.S. 15-year-olds has fallen to 17th in science and 25th in math. In fact, according to U.S. News and World Report, “our top students are generally not competitive either.” Some years back, Bill Gates said, “When I compare our high schools to what I see when I’m traveling abroad, I’m terrified for our workforce of tomorrow.” America spends nearly six times more money on its students (in GDP terms) than most other countries, yet our students are merely “average.”

Of course, our country’s political discourse on the issue of education reform has been as painful to listen to as every other political debate today—both the Right and Left stick to their ideological orthodoxies and our kids suffer.

Whose interests are we protecting?

In China, on the other hand, government investments in STEM are paying significant dividends. Not only are the Chinese churning out the world’s next innovation leaders, but thanks to their investment in research and development along with a willingness to give the technology time to bear fruit, China is leading the way in specific new technological frontiers. Though many Western leaders and scientists dismissed the concept, their quantum Internet is proving to be a success. Whereas NASA Eagleworks lab is fighting for greater support of its revolutionary EMDrive, China quietly has been building up its own EMDrive as a means of beating the Americans to Mars. And, more importantly, China has been serious in its development of antiballistic missile defense (ABM) systems.

Yet, our leaders continue to dither when it comes to missile defense.

With the rise of nuclear rogue states in North Korea (a nominal Chinese client) and Iran (a nominal Russian client), the threat of nuclear warfare has returned. However, America’s ability to protect itself—and its allies—from nuclear war remains outdated. And, with China now developing its own ABM systems, the Chinese will likely add fully workable ABM defenses to their increasing repertoire of military capabilities which will only further diminish America’s strategic advantages over China.

Because China has made the requisite levels of investment and commitment to developing the human capitalnecessary for dominating the new knowledge economy of the 21st century, they are now beginning to take the lead in the crafting of critical technologies. The United States has neither made the necessary investments nor committed itself to developing a plan for shaping the next generation of great technological innovation. That starts with reforming our education system entirely. If we don’t, we will lose the great geopolitical game with China and other foreign actors.

CLICK HERE to finish reading at American Greatness! Thanks.