The North Koreans put on their own pyrotechnic display over the July 4th weekend with a successful launch of an ICBM into the Sea of Japan. With a working ICBM, Kim Jong-Un’s regime is now capable of reaching Alaska. If they continue testing and learning from their previous launch, it is only a matter of time before the North Koreans could strike any major American city.

Time is all that stands in the way between Kim and the ability to incinerate Los Angeles or Chicago or New York. It wasn’t that long ago the North didn’t have nukes at all.

In 1994, the Clinton Administration wanted to strike a nuclear reactor in Yongbyon to prevent the North Koreans from recovering the raw materials necessary for making nuclear bombs. However, after looking at his options—the costs, both in terms of lives and treasure, that another Korean war would incur—former President Clinton chose to create a multilateral framework that would encourage the North to abandon its nuclear weapons program in exchange for Western concessions.

The North’s demand was simple: if the United States did not want to see a nuclear-armed North Korea, they had to pay the Kim regime not to develop nukes.

Meanwhile, the North Koreans took the blackmail money and invested it in their military—including their nuclear program—and in a program of enriching the corrupt members of the regime. They then systematically raised the stakes on the international community.

From George W. Bush to Barack Obama, different combinations of carrots-and-sticks were paraded in front of the North Koreans in an attempt to stabilize relations and bring security and stability to the Korean Peninsula. Each time, the Kim Regime was unfazed. Indeed, in spite of sanctions, the North Koreans successfully tested a nuclear weapon in 2006. So, whether you’re Hillary Clinton demanding that Trump replicate her husband’s schemes from 1994, or if you’re Elliot Abrams insisting that Trump reinstitute the George W. Bush-era sanctions regime, you’re making an argument that—however different in particulars—is the same in its level of utter ineffectiveness.  .

Over the last two decades, the North has become the hub of international criminal schemes, a critical point in the global human trafficking system; it has suborned international terrorism; and more importantly, it has become a major player in a global, illicit network of nuclear proliferation. On the international stage, North Korea’s nuclear shenanigans are protected by the Chinese and the Russians. The primary beneficiaries of all this are other rogue states, such as Iran. Clearly, this is not the kind of regime with which Americans should feel comfortable in the knowledge that it possesses nuclear weapons.

Many (until recently, myself included) had hoped China would apply pressure to goad Pyongyang into being more cooperative. It’s clear now that China won’t lift a finger to help (though Beijing will happily string the United States along, so the Chinese can extract more concessions from us). China fears what would happen if the Kim regime collapsed: their worst nightmare is for a human tidal wave of North Korean refugees to swamp their borders and destabilize their country. Plus, the Chinese historically favor “stability” above all else. They cannot be relied upon. And, now with Russia getting involved on behalf of North Korea, there is little hope for an international settlement on this issue. The autocrats will have each other’s backs. 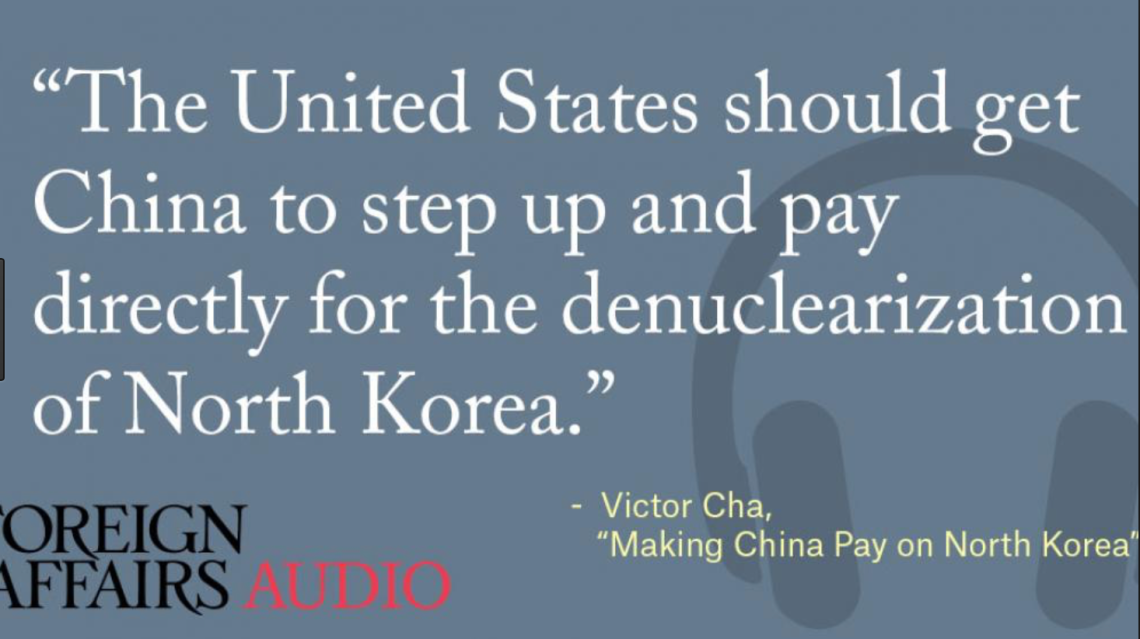 Pyongyang has paid close attention to what has happened to similar autocratic dictatorships around the world that did not possess nuclear arms: America toppled them. Whether speaking about Saddam Hussein or Muammar Gaddafi, a lack of nuclear arms makes such regimes susceptible to being overthrown by the United States. Meanwhile, similar regimes that may have nuclear arms—such as Iran—are given a wide berth by the United States.

Many opponents of military action understandably (if erroneously) reason that the North’s quest for nuclear arms is about self-preservation rather than territorial aggrandizement. Attempting to understand North Korea’s actions through the application of reason—we are talking about  a regime where it is illegal for citizens to urinate alone because the Kim regime believes bathrooms are great places to start rebellions—is not an effective way to craft a reliable foreign policy. Kim Jong-Un simply does not exist in the same reality where you and I do. Expecting him to comport with international norms is absurd.

While the Kim regime is technically a Communist government, the ideology that governs North Korea is known as “Juche” (or, more technically, “neojuche revivalism”). The official state ideology is a mixture of Marxism and ultra-nationalism. Juche is dangerous because it is infused with the historical Korean concept of “songun,” or “military-first,” and it channels all state resources into the North Korean military—specifically its nuclear program. The ideology is also backward-looking: it promises to return the economic and military power that the North enjoyed in the 1950s and ’60s, while reuniting the Korean Peninsula, and returning that newly united Korean Peninsula to the extreme isolation it enjoyed before the West opened up trade with Korea.

The only way that the Kim Regime could ever hope to achieve the goals outlined in its Juche ideology is by removing the threat that America and its allies pose to the North. The Japanese are not backing down. The South, despite its ambivalent response to the North’s repeated provocations, does not want to see a nuclear-armed North Korea. And, the United States has simply invested far too much wealth, resources, and diplomatic capital on building up the South Korean defense to just abandon the South in its crucible—not without extracting considerable concessions from the North Koreans. Kim Jong-Un knows this. Juche is not a self-defensive ideology. Rather, it is a militaristic and offensive belief system. If the North gets a fully functional nuclear arsenal, they will use those weapons to strike at their American, South Korean, and Japanese enemies. To those who say that we should negotiate away our position on the peninsula in exchange for peace: one can never negotiate from a position of weakness. Should the North Koreans use their nuclear arsenal to intimidate the United States into withdrawing from South Korea, then it will be open season on America throughout the world. Overnight, our foreign policy would be thrown into disarray, with no hope of correction. Allies would distance themselves while enemies would become emboldened. This is simply not a viable strategy. Like it or not, we are committed to defending South Korea (and ourselves) from the mad dictator in Pyongyang.

Given these facts, why should we waste precious time on negotiations that will only empower the North and weaken the rest of us? We should be preparing for conflict on the peninsula, not begging the North to take more handouts from us as they build better nuclear weapons. We should build up the anti-ballistic missile defense system, THAAD, in South Korea to better defend against potential North Korean nukes. We should moving more U.S. forces into the region. We must be preparing strikes against suspected WMD sites in North Korea. Also, we might want to consider either giving South Korea nuclear arms to defend themselves or introducing our own nuclear forces to better defend South Korea from a potential North Korean attack. 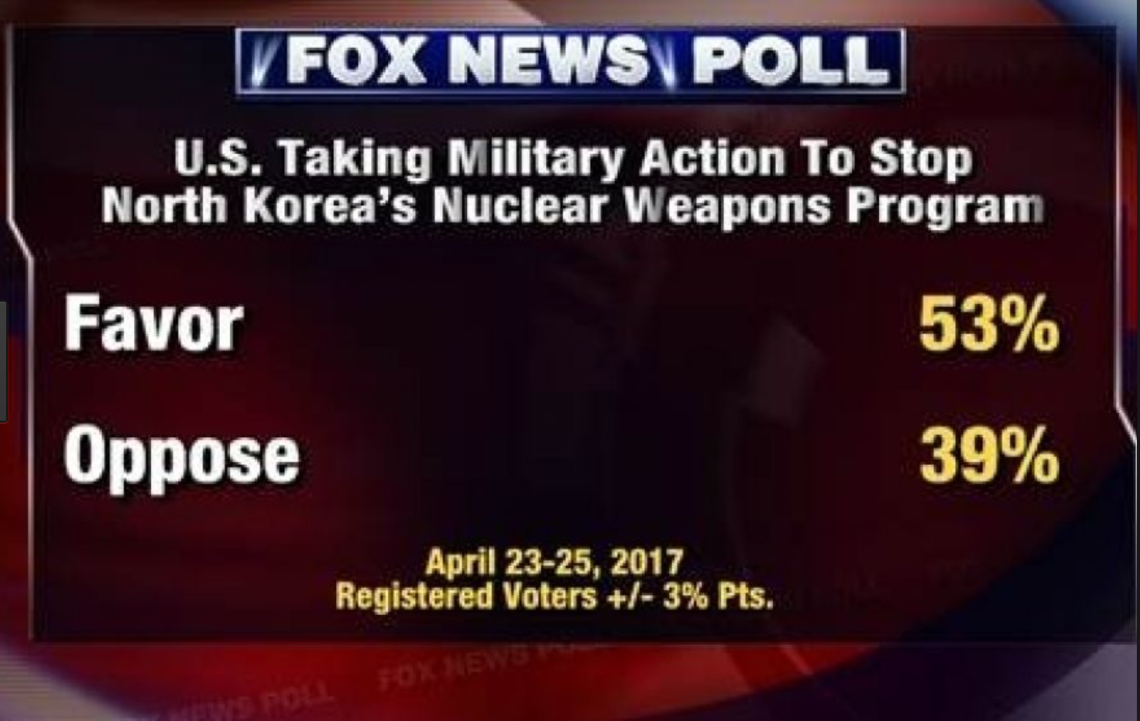 CLICK HERE to finish reading the piece at American Greatness! Thanks.