While doing my usual perusal of the international press, I was alerted to the fact that The Independent was running this story. My friends, we have truly crossed the Rubicon of reason and we are solidly in what James Angleton used to refer to as “the Wilderness of Mirrors.” In an era where everything that one disagrees with is labeled as “fake news,” this story takes the cake.

President Recep Erdogan of Turkey has just accused his U.S. partners of supporting the Islamic State as well as a whole host of other terrorist organizations. In fact, whatever support Wahhābīst groups may have received from the U.S. (which would be entirely by accident) in the ongoing Syrian Civil War is almost entirely due to the Turkish government.

“They [the United States] were accusing us of supporting Daesh [Islamic State], now they give support to terrorist groups including Daesh, YPG, PYD. It’s very clear. We have confirmed evidence, with pictures, photos and videos.” – Erdogan in a statement to Reuters

When the U.S. decided to lend support to the anti-Assad rebels fighting in Syria, they relied heavily on the recommendations of the Turkish government, as the Turks were not only a long-time ally of the U.S., but Syria was in their proverbial backyard. The Turks had been involved in anti-Assad operations for some time, as Turkey’s Erdogan is a Neo-Ottamanist seeking to topple secular Arab strongmen, such as Assad, and replace him with more pliant Islamist leaders of a Sunni bent (this would, in theory, allow Turkey to return to its historical dominance over the Mideast).

Erdogan has been dead-set on reasserting Turkish control over the former Ottoman lands of which it was dispossessed of by the victorious French and British powers during the First World War in the Sykes-Picot Agreement. Since his rise to power, Mr. Erdogan has been a vocal proponent of Islamist policies of a Wahhābī variant.

He supported the ouster of Libya’s Muammar Gaddafi in 2011. Erdogan’s government supported the overthrow of Egypt’s President Hosni Mubarak in favor of the terrorist organization, the Muslim Brotherhood when the Arab Spring swept across Egypt. Mr. Erdogan was also an early proponent of regime change in Syria when the country devolved into civil conflict five years ago.

When the U.S. was seeking allies in building a coalition to topple Assad several years ago, Erdogan’s Turkey was a gleeful early participant. Indeed, once the U.S. determined that it needed to intensify its activities in both Syria and Iraq, Turkey allowed the U.S. to use its airspace for military activities–provided that the U.S. limit its support of Kurdish forces and only target those groups which the Turks deemed as threats and supported those groups that the Turks identified as allies.

As such, the U.S. ended up creating a nexus of support across the wider Middle East and North Africa–funneling arms from Libya through Turkey into Syria and moving Syrian rebels into Turkey for covert training. The U.S. has never supported the Islamic State of Iraq and Al Sham. However, given the porous nature of most anti-Assad rebels in Syria, the fact that so many fighters serving in disparate rebel groups are linked by both blood and faith, means that it is virtually impossible for the U.S. to know fully who it is providing support for.

A Syrian rebel fighter may be a devout Jihadist who happens to also be wearing the colors of the purportedly “moderate” Free Syrian Army. Such an individual would enjoy the benefits of U.S. military backing whilst lending aid to fellow Jihadist fighters operating in groups such as IS, al Qaeda, Al Nusra, or other, smaller groups opposed to the U.S. as well.

So, when Erdogan accuses the U.S. of knowingly supporting IS and other Jihadist groups it is not only absurd, but it is laughable. The U.S. was simply taking the advice of its ally in Turkey on who to support.

The Obama Administration’s foreign policy vís-a-vís Syria and the greater Middle East has been a disaster. The President’s fecklessness and indifference, coupled with his unremitting obsession with reducing America’s military capabilities, has made it possible for Erdogan to make these accusations.

On a personal note, I have little doubt that the Obama Administration’s horrific policies in Syria has seen the U.S. inadvertently acting as a nominal supporter of Jihadist groups fighting Assad. But, that does not mean that the United States is supporting terrorists. It means that we have a terrible policy that has been, in part, shaped by a derelict ally, Erdogan’s Turkey–who is now abandoning the United States at a critical juncture.

Furthermore, the Turkish government has been apoplectic over America’s relationship with the Kurds of northern Iraq. As I stated in a previous interview with Don Kroah in June of 2016, this is due to the fact that the Turks traditionally fear Kurdish independence, as a Kurdish state would reduce Turkey’s territorial size significantly.

Yet, the reason that the U.S. is supporting the Kurds (outside of the fact that they’re a great friend to our country) has more to do with the fact that a) the Kurds are most threatened by the IS advance through northwestern Iraq and b) the Kurdish military–the fearsome and powerful Peshmerga–are the most capable American ally currently on the ground.

As for supporting the Islamic State: Mr. Erdogan’s accusations are patently absurd and should frost any objective observer of the situation in Syria and Iraq. Make no mistake, Erdogan has consistently lent considerable support to the Islamic State. When push-came-to-shove in 2014, Turkish military units were deployed not to assist their Kurdish coalition partners at the gruesome Siege of Kobane, but rather, to help IS capture the besieged city and slaughter the Kurdish inhabitants there.

As I noted earlier this year:

“The most egregious violation came in 2014, when it was revealed that Erdogan and senior members of his government were deeply involved in financial transactions with the leadership of the Islamic State. Once this news was reported, the Kurdish population in Turkey broke out in protest, as they assumed that the Turkish military allowed the Islamic State to capture Kobane and slaughter their Kurdish brethren in Syria. In one protest, 43 Kurds were killed by government forces. In order to quell the unrest, Erdogan announced that Turkey would involve itself deeper in the fight against the Islamic State.”

That was not the only time that the Turks supported IS over actual coalition partners.

Indeed, now that Erdogan’s government has completely asserted its power back in Turkey, creating a new authoritarian regime with Erdogan as the new Sultan following the abortive Gülenist coup this last summer, Turkey has also flipped sides in the Syrian Civil War. No longer dedicated to the overthrow of Assad and lured with the promise of being an integral part of Iran’s proposed pipeline through Syria (as well as with promises of completing the TurkStream Pipeline connecting Turkey with Russia), Erdogan has thrown his lot in with the Russo-Iranian-Alawite alliance in the Syrian Civil War. 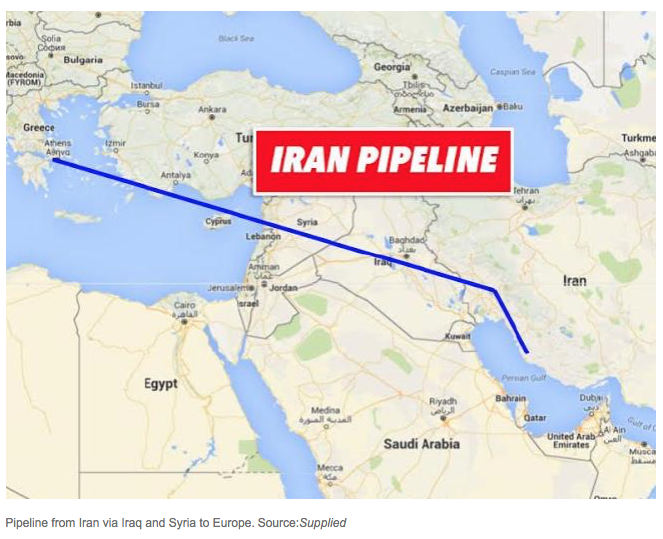 At the same time, Mr. Erdgoan has made moves to distance his country from NATO, an alliance that Turkey has been an integral member of for almost 60 years. With the recent proclamation that Turkey will begin purchasing the Russian S-300 Air Defense System  for its national defense network, interoperability with NATO forces will have been degraded and Turkey will have been further removed from the NATO alliance, and be made closer to Russia.

Such a move will erode NATO’s capabilities at defending its vital southern flank–which I suspect is a critical factor in Vladimir Putin’s newfound bromance with Erdogan (remember, Turkey and Russia have historically been enemies going back to the time of the Sultans and Czars).

The Obama Administration’s Syria policy has helped cobble together a wholly anti-American alliance in the Mideast. Iran is now more powerful than it has ever been. Assad will remain in power, thereby allowing Syria to continue to be a conduit of  anti-Israeli violence (Iran funnels weapons and personnel through Syria into Lebanon and the Palestinian territories, where it winds up in the hands of Hezbollah and Hamas).

Turkey will now be empowered to fulfill its Neo-Ottomanist agenda–particularly now that Turkey is trying to pull Saudi Arabia and Qatar into the ongoing peace negotiations over the Syrian Civil War–at the expense of the United States. What’s more, Russia will have been made the new big player in the region. 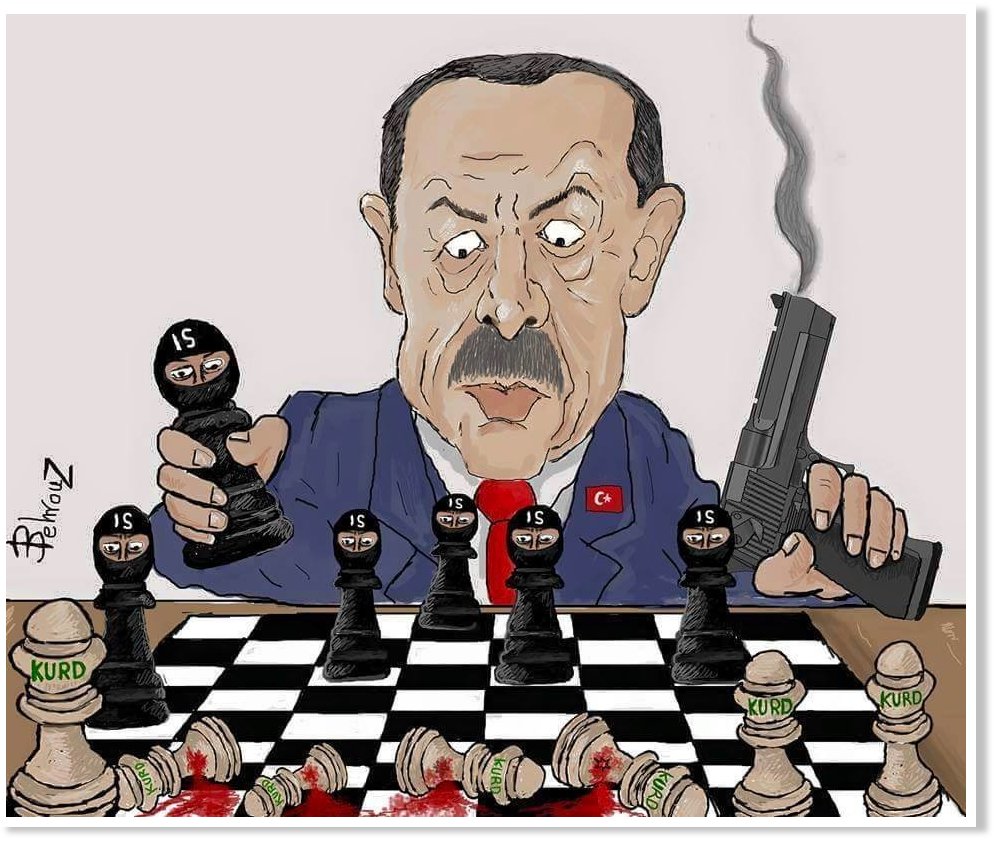 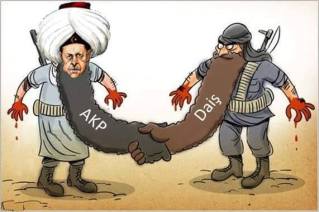 Erdogan’s Turkey, once a bulwark to Russian aggression in the greater Mideast and Europe, is now the linchpin of it. His anger at the United States has nothing to do with actual grievances. The rage on Erdogan’s part stems from multiple factors. First, he believes that the U.S. supported his Gülenist rivals in Turkey.

Second, he stands to benefit from aligning his fate with Russia, Assad, and Iran. Third, his Islamist tendencies put him at odds with the United States. Fourth (and most importantly), he is particularly heated over America’s ongoing support of the Kurds. Due to this, he will continue to gravitate to this new anti-American alliance in the Mideast.

This, then, explains why Mr. Erdogan’s comments elicited my response of laughter. Everything that has happened in his surrounding region (particularly the rise of the Kurds) has been precipitated by his own poor decisions, as documented above. Yet, it is easier to blame America for his woes. Don’t buy the hype: Erdogan is full of it.